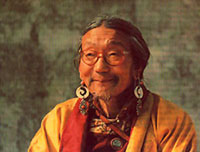 Tulku Dorlo Rinpoche was born in the 1930's in Kham Minyak, Tibet near the stronghold of the great Bodhisattva Tangtong Gyalpo. Dorlo Rinpoche was known both for his mastery over Dzogchen meditation, especially the teachings on the channels, energies and essences, as well as his previous births as an accomplished Nyingmapa yogi. He is the tulku of both Rigzin Jatson Nyingpo and Trozer Gyase Dorje Dudul, who was a famed "goer-and-returner" from the early 20th century.

After practicing in solitary retreat in a cave, Trozer Gyase Dorje Dudul died for seven days when he traversed the bardos and six realms, practicing meditation and working for the benefit of beings suffering there before coming back to life. 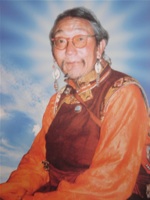 Dorlo Rinpoche studied at Gatok University in Kham, one of the centers of the Nyingmapa sect, where over a hundred thousand yogis attained rainbow body. In his younger years, Dorlo Rinpoche received teachings on the entire Nyingmapa cannon, notably the channels, energies and essences, Trekchod and Todgyal. He stayed in solitary retreat until Tibet's fall in 1959, when he taken into custody and imprisoned. After his release, he practiced as a wandering yogi. Nearly 20 years ago, Dorlo Rinpoche and Tsara Dharmakirti Rinpoche became close dharma friends. Because of his great respect for Dorlo Rinpoche's mastery over the teachings, Tsara Dharmakirti Rinpoche sent his heart student Anyen Rinpoche to study the channels, energies and essences with him.

Dorlo Rinpoche was considered the highest authority on the practices of the channels, energies and essences in all of Tibet until his recent passing in 2004. Lama Chatrel Sangye Dorje said that regarding these teachings, there was no greater master in modern times.