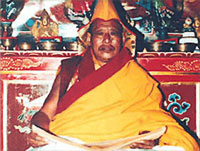 Dehor Geshe was born in the 1930’s in Kham Dehor, Tibet. When he was a child, he was known as the most intelligent child in his village. He mastered his study of prayer and philosophy in the Gelugpa lineage easily and then went to Dripong Losarlang Shedra in Lhasa. There, he studied the full canon of Sutra and Tantra and began to circulate among the other large shedras in Lhasa, notably Serra and Gaden, practicing debate. It was said that Dehor Geshe was undefeatable!

In 1959, when many of Dehor Geshe’s students and teachers fled to India, Dehor Geshe vowed to remain in Tibet as a servant of the Dharma. He returned to his homeland of Kham, Dehor where he faced many difficulties because of the political situation there. However, Dehor Geshe’s skill in debate served him well during those years, for no matter how hard anyone tried to make it seem like Dehor Geshe was in the wrong, he could always make sure his life was spared through using his incredible patience, meditation on Bodhichitta, and logical arguments.