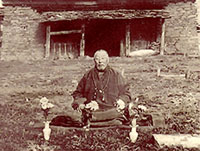 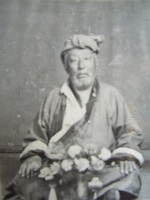 Lama Chupur was born in 1905 in Amdo Trokyap, Tibet. From the time he was a child, his conduct was always unusual and he kept the habits of a wandering yogi. Although he was recognized as a tulku by several prominent Lamas of the time, he never accepted the higher status that came with his title and refused to wear special robes or distinguish himself in anyway.

First, he studied with his root teacher Zankar Kuchen Rinpoche, who was the emanation of Jigme Lingpa and a Lama marked by many miraculous accomplishments. Later, while traveling throughout Tibet, he met Yikok Chatrel Rinpoche, became his heart student, and received the complete teachings on the Longchen Nyingthig. From there, he wandered throughout Tibet with only the clothes on his back, staying in one place only long enough to study with an accomplished teacher before he moved on.

Lama Chupur studied with several eminent yogis who spent their whole lives in solitary retreat, such as Sangba Druptop and Gyaje Druptop, who were known for having gained mastery over the five elements. Such Lamas were the kind who needed to do no ordinary work such as gather wood, food or water because they could miraculously create whatever they needed by pulling it out of the walls of their caves, beckoning it to them, or even creating it from their own feces. Lama Chupur himself exhibited these signs, as many stories about his life tell of him flying over rivers (hence his name “flying over water”) or attaining the secret signs of accomplishment of the Dzogchen teachings.

Lama Chupur spent the years after the Chinese arrived in the forests of Tibet as a wandering yogi. He was never caught, and always seemed to know exactly where to go and what to do to avoid trouble. In the late 1960’s, he returned to Amdo Trokyap where he lived with Anyen Rinpoche’s parents, who were his students. After Anyen Rinpoche was born, they lived together not only as one family, but as teacher and student and Anyen Rinpoche received all of his early instruction and empowerments from Lama Chupur. Lama Chupur arranged for Anyen Rinpoche to meet Tsara Dharmakirti Rinpoche for the first time when Anyen Rinpoche was seven years old, after he noticed Anyen Rinpoche’s unusually strong faith in him.